The first episcopal church of Florence was the ancient basilica of S. Lorenzo 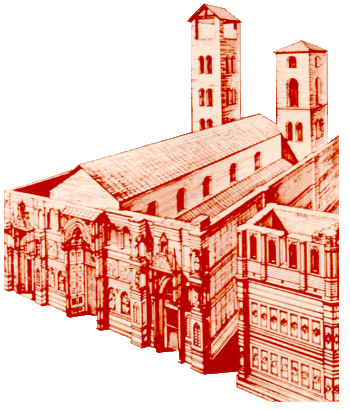 Hypothetical view of the ancient Florentine Cathedral of Santa Reparata 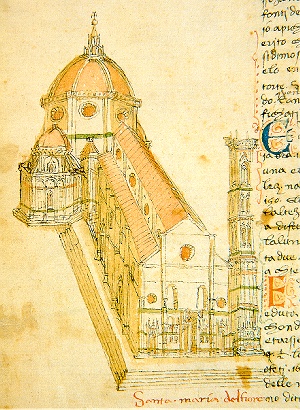 The Cathedral you visit today is the result of 170 years of work. The first stone of the façade was placed on 8 September 1296, based on a project by Arnolfo di Cambio who, simultaneously, directed the construction of Santa Croce and the Palazzo della Signoria. The Arnolfian project, however, underwent numerous changes, the most evident of which are visible on the external sides of the building, to the north and south, where the first four windows are lower, narrower and closer than those towards the east, which they correspond, however, to the extension made by Francesco Talenti, master builder starting from the mid-300th century. The radial chapels to the east were completed in the early 400s and the gigantic dome, designed by Filippo Brunelleschi, was built in just 16 years, from 1418 to 1434, "structura si grande, rising above and skies, wide to cover all with its shadow and Tuscan peoples ”, as Leon Battista Alberti wrote at the time. The lantern, designed by Brunelleschi, was made after the artist's death (1446) and the gilded copper ball with the cross, containing sacred relics, the work of Andrea del Verrocchio, was placed in 1466. 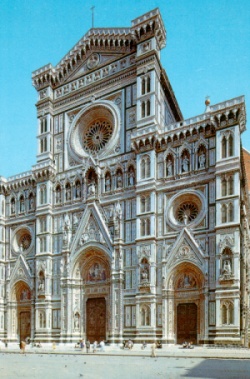 The last component of Santa Maria del Fiore to be built was the façade, built to a design by Emilio De Fabris between 1871 and 1887, in a neo-Gothic style that recalls the "true" Gothic of the bell tower and of the portals on the sides of the Duomo. This facade, like Arnolf's one, honors the Mother of Christ: the figure above the central door, Mary enthroned holding a flowery scepter (by Tito Sarrocchi), dominates all the rest. But the nineteenth-century program has above all a historical and national character; the mosaics, designed by Niccolò Barabino, represent: above the central door, Christ enthroned between Mary and St. John the Baptist, with Florentine saints; on the right (towards the south, that is), Florentine artisans, merchants and humanists who pay homage to the Faith; and on the left (to the north), La Carità among the founders of the Florentine pious works. 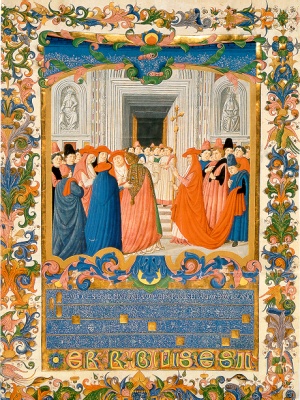 Pope Eugene IV, on 25 March 1436, consecrates the Cathedral of S. Maria del Fiore. (Miniature from a liturgical code preserved in the Laurentian library)