Seat of the Florentine Chapter 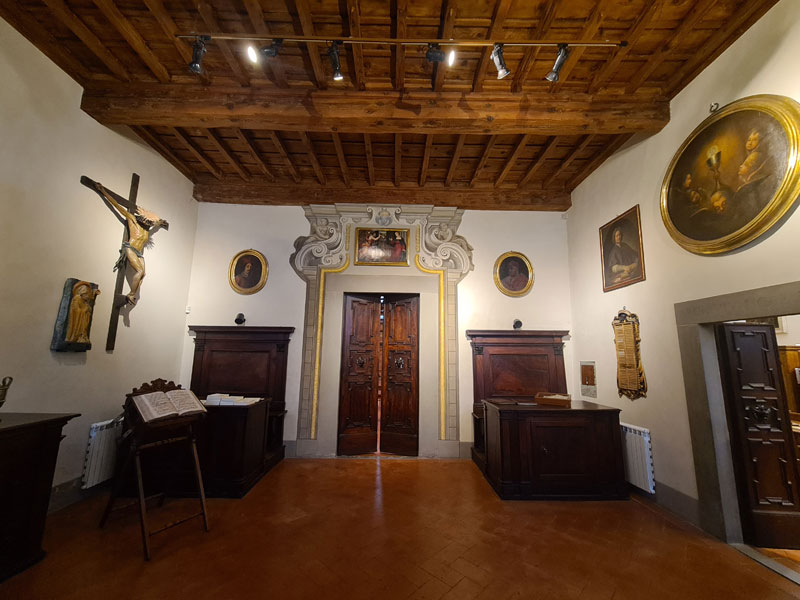 The Florentine Metropolitan Chapter is located in the former church of S. Pietro in Ciel d'Oro (or S. Pier Celoro), located in Piazza del Capitolo in Florence, mentioned for the first time in an imperial diploma of 962.
With the construction of the new cathedral, the church found itself surrounded by the houses of the canons, in a sort of island bounded by a wall. It therefore lost its parish function and at the same time the idea of ​​transforming it into a public library owned by the Opera del Duomo was born. The project was supported by the consuls of the Wool Guild and by the Signoria, and had the authorization of Pope Niccolò V, institute of the Vatican Library, and of Archbishop Antonino Pierozzi.
The "House of Wisdom", as it was then defined and as we can still read today above the entrance door ("Sapientia aedificavit sibi domum"), opened to the public in 1448. Unfortunately, being located inside the rectory, and being consisting mainly of donations from prelates, it soon became the library of the canons. Furthermore, the coexistence between the public library and the Chapter (which carried out its activities in the chapter house) became increasingly difficult. Thus in 1680 the book collection was crammed into the residence of the Opera del Duomo (current museum), while the Chapter arranged its archive, which is still preserved there, in the space that housed the library.
In 1778 the Grand Duke Pietro Leopoldo definitively suppressed the library: manuscripts and incunabula passed to the Medicea Laurenziana library. (The manuscripts are still in the Edili Fund) the incunabula instead, in 1783, were definitively transferred to the Magliabechiana library. There is no news of the remaining book material. However, the "House of Wisdom" did not completely disappear. In fact, from a plan dated 1839 it can be seen that the part of the chapter house overlooking Via della Canonica, at the time housed a small library: the nucleus of today's library.
Currently the Florentine Metropolitan Chapter is the seat of the historical archive and library of the same institution. The archive, which consists of about 5000 units, is divided into two main sections: the diplomatic fund and the paper archive, with a chronological coverage that extends from the ninth to the twentieth century. The library, specializing in Tuscan religious and historical-artistic works, consists of about 10000 volumes, which include sixteenth-century and manuscripts. The archival and book material can be consulted by users in the suggestive study room located inside the archive.
One of the tasks of the capitular institution is to hand down and preserve its history, inevitably and naturally intertwined with that of the city of Florence, with its traditions and its art. For this reason, in addition to the regular consultation service, the Chapter periodically supports the setting up of exhibitions, aimed at making its archival and artistic heritage known. Guided tours are also organized to the headquarters, a silent and unchanging guest of valuable works of art, sometimes commissioned for the Chapter itself, other times from churches owned by it or the result of bequests and donations.
The Chapter is a place where time seems to have stopped, where every object passes on history and lived life. Among the most important works of art we find the panel depicting the Madonna and Child attributed to Cosimo Rosselli (1501), the papier-mâché processional crucifix attributed to Felice Palma (1505th century, first quarter), the Annunciation attributed to the school of Andrea Del Sarto (1510-16450), the portrait of Antonio Medici attributed to Sustemans (1660-XNUMX), the panel attributed to Francesco Brina depicting the BVM with the Child, St. Anne and St. John the child (XNUMXth century), the crucifixion on a silver plate attributed to Alessandro Allori (last quarter of the XNUMXth century).