The bell tower of Santa Maria del Fiore was begun by Giotto in 1334, carried on after his death by Andrea Pisano and completed in 1359 by Francesco Talenti, creator of the windows of the upper levels. Extremely rich is the sculptural decoration with 56 reliefs in two superimposed registers and with 16 life-size statues in the niches by Florentine masters of the '300 and' 400, including Andrea Pisano, Donatello and Luca Della Robbia. 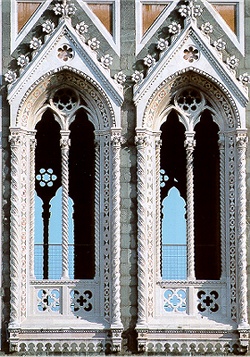 On the façade facing the Baptistery, in the lower register, the Creation of man and woman are depicted, the first human work and the biblical founders of various human creative activities (sheep farming, music, metallurgy, viticulture). In the upper register are the 7 planets, starting with Jupiter at the north corner. On the other facades, then, are illustrated, below, astrology, building, medicine, weaving and other scientific and technical activities. In the upper register there are: to the south, the theological and cardinal virtues; to the east, the liberal arts of the Trivium and Quadrivium; to the north, the 7 sacraments. The statues in the niches represent patriarchs, prophets and kings of Israel, and pagan sibyls. The originals of all the sculptures are in the Opera Museum.

Historical information on the bells

In the documents of the Opera di S. Maria del Fiore and in the work of RICHA on the Florentine churches we find:

1 - The major bell bears the name of S. Reparata. It had been made in 1475. Having broken, it was recast by Antonio Petri in 1705; it weighs 15860 pounds.
2 - The so-called “Mercy” Bell. Having broken, it was recast by Carlo Moreni in September 1830, and weighs 6414 pounds.
3 - The Bell called the "Apostolic". It was cast in April 1516 by Lodovico di Guglielmo and weighs 5000 pounds.
4 - The Bell called the "Beona". It is not found either in what epoch it was merged or by whom. The weight is calculated in 2760 pounds.
5 - Bell called of Terza, which bears the name of "Maria Anna". Like above. It weighs 2152 pounds.
6 - Small bell. Cast on November 4, 1513; is weighing 1400 lbs.
7 - Smaller bell. Cast in December 1514; weighs 1000 pounds. Total 34586 pounds. In the years 1956 - 57, following the replacement of the wooden frame that supported them with a new metal structure, and the simultaneous motorization of the movement of the bells, the Commission in charge of this decided to exclude the five smaller bells from the concert, four of which were deposited, inactive, in the compartment of the large windows of Giotto's bell tower, while the third, the so-called “Apostolica”, was placed on the floor of the belfry.

Thus, five new bells were merged, by the Prospero Barigozzi company to replace those "set aside". They are decorated with bas-reliefs illustrating Marian episodes (and privileges), by well-known sculptors.

At present the bells in use have the following characteristics:

Each recast bell bears, also in bas-relief, its own name, the coat of arms and the name of Cardinal Archbishop Elia Dalla Costa who consecrated them, in the Baptistery, on 10 June 1956 and also the emblem of the Opera di S. Maria del Fiore. and the Municipality of Florence. Some Latin couplets are engraved on the last four.

In the year 2000 - 2001 the electrification and motorization system of the bells was completely renovated by the Opera di S. Maria del Fiore. The ancient way of ringing the bells (which at that time were four) is documented in the thirteenth century by the code "Mores et consuetudines Ecclesiae florentinae" (Biblioteca Riccardiana), and varied, as is still done today, according to the degree of the celebrations:

Currently the bells are rung ("double") only for archbishop or chapter celebrations; the single bells signal the Ave Maria every day (7 am, noon, and in the evening) the penultimate hour of the day according to the ancient and canonical calculation (23 pm) which invites the recitation of the "Creed" for the dying and the first hour of the following liturgical day (the "one hour") which recalls the custom of reciting the "Requiem" for the dead. He also reports the suspension from work due to the break from the meal (11.30 am) and the death of a head guard of Mercy.

Traditionally, minor doubles are played also for some more significant devotional circumstances such as the solemn Rosary of the months of May and October, the "Via Crucis" on the Fridays of Lent, the Christmas Novena and for any other occasions that the Chapter must authorize. It is not played for individual daily Masses or for other devotional functions.