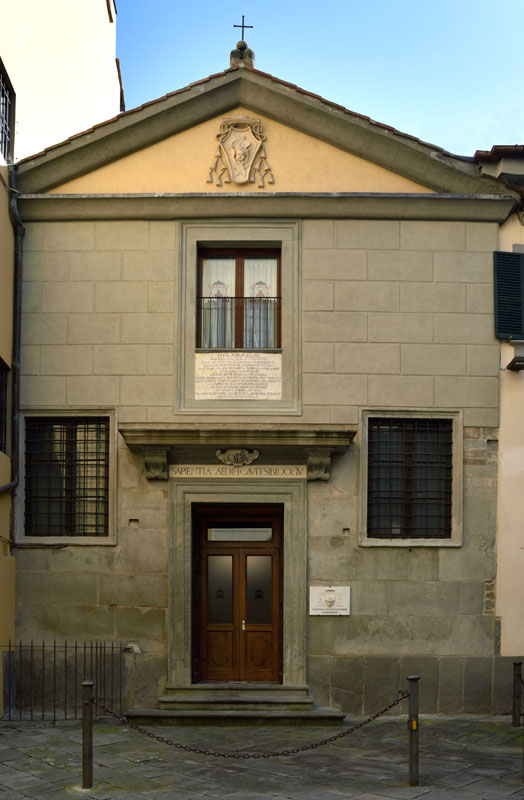 Seat of the Florentine Metropolitan Chapter

The first documented information on the Chapter of the Cathedral, then called of S. Reparata, dates back to the first half of the eighth century, when throughout Western Christianity we are witnessing the spread,
among the secular clergy, of community life.

During the Gregorian reform (XNUMXth century), the canonical college also determined its tasks and structures with greater clarity in Florence.
Among other things, until the fourteenth century, he was entitled to elect the bishop, very often chosen from among its members.

The edition, edited by Renato Piattoli (1938), of the most ancient parchments of the precious diplomatic fund of the Florentine Chapter, made it possible to reconstruct the first stages in the history of the "rectory" and its dynamics towards both the bishop's authority and of civil institutions.

The growing interference of the latter in the ecclesiastical life of the city and diocese was crowned, as is known, at the end of the XNUMXth century, by the great undertaking for the construction of the new Cathedral of S. Maria del Fiore, completed only in the XNUMXth century. . This activism of the Municipality and of the so-called "Arts" went far beyond the architectural objectives, to encroach on the delicate beneficiary material (with the establishment of numerous canonicals by the Arte della Lana) and the exercise of worship.

The centrality of the Cathedral Chapter on the political and social scene of Florence is testified by the constant presence of exponents of the city ruling class among the assignees of the major canonical offices. The hegemony of the great Florentine families over the canonicals of the Cathedral manifested itself through the frequent recurrence of families such as the Minerbetti, the Gianfigliazzi, the Medici, the Strozzi, the Corsini, the Albizi. For example, it belonged to the Florentine Chapter Giovanni de 'Medici, who later became Pope Leo X.
There was no lack of men of culture, such as Marsilio Ficino, or of a holy life, such as Ven. Lorenzo M. Gianni.

Among the Florentine Bishops who dedicated particular attention to the Chapter are S. Podio (X century), Atto (XI century), Ardingo (1231-1249), Antonio d'Orso, former canon and archpriest of S. Reparata, Florentine prelate from 1309 to 1321, to whom we owe the first known Chapter Constitutions, preserved in manuscripts in the archives. In the XNUMXth century, Archbishop S. Antonino Pierozzi was the executor of the papal bulls of Niccolò V according to which a public library, entrusted to the canons.

The library remained alive until the XNUMXth century, when, by decision of the Grand Duke, volumes and codices were transferred to the Laurenziana and Magliabechiana Libraries.

Note also the close connection that, in medieval times, throughout the Renaissance and until relatively recent times, existed between the Chapter of the Cathedral and the Florentine Studio, which was based in the current Via dello Studio, in premises still owned today. of the Opera del Duomo.

Among other things, the emblem of the current University of Florence, heir of the ancient "Studio", still bears the "seraph" which constitutes the coat of arms of our canonical college (a red seraph on a white background, surmounted by the "galero "Of the apostolic protonotaries).

In the course of its history, the Florentine Metropolitan Chapter has renewed its Constitutions several times. The first known are those approved by Bishop Antonio D'Orso in 1309; the latest were approved by Archbishop Giuseppe Betori on January 17, 2013.

Currently the college is made up of twelve Canons and six Honorary Canons, appointed by the Archbishop after hearing the Chapter. Among the Canons there are a Dignity, the Archpriest, and four Offices: the Proposal, the Penitentiary and the two Camerlenghi.

The Archpriest is an honorary title only. Until 1984 - when the Chapter renounced the parish care of souls, transferred to other churches in the city center - he was responsible for the management of the parish of S. Maria del Fiore.

In the name of the canonical college, the liturgical care of the Cathedral, the Baptistery and St. Benedict is entrusted to the Proposer (or Provost).

The Penitentiary takes care of the administration of the sacrament of Reconciliation.

The two Camerlenghi are administrators and general procurators of the Chapter and, acting in his name, exercise the legal representation of the Chapter itself, of the Cathedral, of the Baptistery and of San Benedetto.

Pope Leo X with the Brief "In supremo militantis ecclesiae" of January 8, 1516 declared the Florentine Canons "notaries of the Apostolic See"; this privilege was confirmed by Clement XII with the short "Apostolatus officium" of January 2, 1731. After the Motu proprio "Pontificalis domus" of Paul VI of March 28, 1968 our capitulars are still, "during munere", supernumerary apostolic protonotaries, and they wear clothes.