Passing inside the Cathedral, one is struck by the vastness of the space and the sobriety of the furnishings. The rich external polychromy that connects the bulk of the monument to the smaller scale of the surrounding buildings, here is transformed into a simplicity that underlines, instead, the titanic dimensions of the church (the largest in Europe at the time of its completion in the '400: long 153 meters, 90 meters wide at the cross and 90 meters high from the floor at the opening of the lantern). 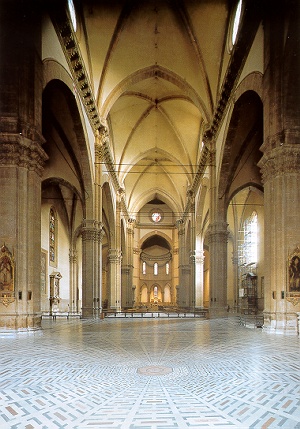 Interior of the Cathedral

The almost bare aspect of the interior of Santa Maria del Fiore corresponds to the austere spiritual ideal of medieval Florence and the early Renaissance; it suggests in architectural terms the spirituality of the great reformers of Florentine religious life, from San Giovanni Gualberto to Sant 'Antonino and Fra Girolamo Savonarola. The formal matrix, then, is twofold: on the one hand, the rough strength of the Romanesque churches and on the other the elegant essentiality of the "beggar" churches, Santa Croce in particular, designed by Arnolfo himself. The enrichment of the Cathedral with sumptuous colored marble floors and with “temple” niches belongs to a second moment in the history of the Cathedral, under the patronage of the Grand Dukes in the 500th century.

Santa Maria del Fiore was built at the expense of the Municipality, as a "state church", and the works of art along the two side aisles are part of a civic program in honor of "illustrious men" of Florentine life.
This program includes: the frescoed equestrian monuments to the leaders John Hawkwood (by Paolo Uccello, 1436) and Niccolò da Tolentino (by Andrea del Castagno, 1456) 9 and 8; and the painting by Domenico di Michelino depicting Dante, from 1465 10, portraits in relief in honor of Giotto 3, Brunelleschi 2, Marsilio Ficino 4, and Antonio Squarcialupi, organist of the Duomo 7, all works of the '400 and early' 500. From the 6th century, however, are the portraits of Arnolfo and Emilio De Fabris, 5 and XNUMX.

In addition to the civic iconography, there is also a religious program that develops in the areas of the Cathedral that are used for worship. Two large images, placed at opposite poles of the processional path, suggest its meaning: a mosaic above the main entrance door (by Gaddo Gaddi at the beginning of the 300th century) and the round glass window above the main altar (the only of the eight "eyes" of the drum that you see immediately when you enter the Duomo, the work of Donatello between 1434 and 1437). Both of them depict the Coronation of the Virgin, that is, the elevation of Mary to her glory after her death.

There is, therefore, an intersection of civic and religious meanings in the Duomo, all revolving around the idea of ​​the dignity of the human being, his greatness and the elevation that is granted him by God. a historical dignity is celebrated - defined by the right use of talents at the service of the community - and in the mosaic and in the stained glass window (as in other components of properly religious iconography) the spiritual greatness of man is celebrated, destined to transcend human history by " reign with Christ ”: universal vocation anticipated in the Coronation of Mary. Even if this definitive elevation will take place only after death, when man finally enters the "time of the Risen Christ", it begins now, in the time of history. The colossal clock above the main door suggests, among other things, this rootedness in history. Executed (in the painted part) by Paolo Uccello in 1443, it is a "liturgical" clock which - like the Church 's holidays order - calculates the 24 hours of the day starting from sunset of the previous day. Finally, the four heads of the prophets in the corners suggest that this "present time" of the Church looks towards another time: a future in which the meaning of the present will be revealed in its fullness.