The 44 stained glass windows of the Duomo constitute the most monumental glass art program in 1,4th-XNUMXth century Italy. They depict saints from the Old and New Testament (in the nave and transepts) and scenes from the life of Christ and Mary (in the eyes of the drum). The list of authors includes the greatest names of Florentine art of the early Renaissance: Donatello, Ghiberti, Paolo Uccello, Andrea del Castagno. From the cruise, under the dome, you have an overview and the effect can suggest the global "iconological" intention: to evoke that spiritual light that illuminates believers through the life of Christ, Mary and the saints. The New Testament, in fact, affirms that in Christ "was the life and the life was the light of men" (John XNUMX). 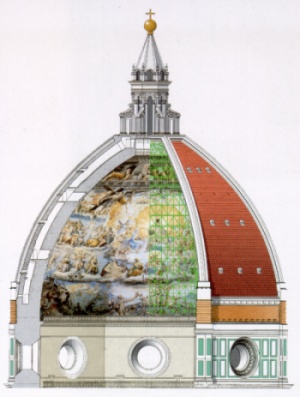 The culminating point of this religious and architectural itinerary is the area under the dome, defined by the choir and the main altar. Both the dome and the choir are intended, in the octagonal shape, to reiterate the symbolism of the Baptistery. The surface occupied by the choir is, in fact, almost the same size as the interior of the Baptistery and, thus, recreates the oldest sacred space in Florence under the new dome. To reinforce the impression of an "infinite" enlargement of the Baptistery would have been the decoration of the dome, commissioned by Brunelleschi (according to ancient sources) in mosaic. As finally realized between 1572 and 1579 by Giorgio Vasari and Federico Zuccari, the decoration is in fresco, not in mosaic. The iconographic theme, however, is the same as we find in the Baptistery: the Last Judgment. The 3600 square meters of painted surface systematically illustrate the traditional faith in a Heaven and a Hell which man accesses on the basis of virtues or vices cultivated in this life, and through a definitive "judgment", once the "useful time" is over. of history. In the central area, above the altar we see the Judge: the Risen Christ in the midst of the angels who carry the instruments of his Passion. This depiction, by the hand of Federico Zuccari, was connected to a sculptural group made 20 years earlier by Baccio Bandinelli for the altar below: a monumental dead Christ, lying on the table, before God the Father blessing. These statutes, removed in 1842, constituted the first "word", so to speak, of a unitary message completed in the dome: on the altar the believer saw Christ dead, but looking up he saw Christ himself risen to glory.

Diagram of the frescoes in the dome

The frescoes in the dome underwent a comprehensive restoration between 1978 and 1994. Of the choir, originally adorned with a superstructure with columns and architraves, today only the retaining wall remains with representations of prophets sculpted by Bandinelli and his collaborators. The current altar, moved forward compared to the sixteenth century one, was placed in 1973, in accordance with the liturgical reforms of the Second Vatican Council. Beyond the altar you can see the "cathedra": the bishop's chair, symbol of the authority of Christ "Master", who, in the Greek term used in antiquity, gives the name "cathedral" to the church in which the Bishop presides. . The Christ of the great crucifix behind the chair is by Benedetto da Maiano, c. 1495-97.

Behind the choir the bronze doors by Luca Della Robbia open onto the northern sacristy, also called "delle Messe" or "dei Canonici": an environment decorated with inlaid wood panels, made by Florentine masters of the '400 and restored after the flood from 1966. The skill of the artists in the use of linear perspective, invented by Brunelleschi in the early 400th century in the same Cathedral of Santa Maria del Fiore is impressive: here where the vestments, books and various objects used for the rites celebrated at altar, the illusionistic inlays show open cupboards with ecclesiastical furnishings on the shelves. Above the door there is the Resurrection of Christ, by Luca Della Robbia, in glazed terracotta and, above still, where there is now the nineteenth-century organ exhibition, there was originally the Cantoria by Luca Della Robbia. In the corresponding position, above the door of the sacristy to the south, there was the Cantoria di Donatello (both today in the Opera Museum).